At the end of April, Anti Police-Terror Project’s Ride for Justice for Steven Taylor drew hundreds. Steven Taylor, a 33-year-old Black father of three, was shot to death by a San Leandro police officer as he struggled with a mental health crisis in a local Walmart.

Demonstrators practiced social distancing from their vehicles adorned with signs that read “Justice for Steven” and “Compassion Not Cops” as they caravanned, circling the Walmart parking lot chanting and honking horns. Afterward, they headed to San Leandro Police Department—cars spanned the distance of several blocks in front of the department on E.14th Street and brought traffic to a standstill on side streets surrounding the station, in a “Noise Protest” that was difficult for passersby to ignore.

In the past two and a half weeks alone, FIVE people have been fatally shot by police in the Bay Area. The recent upsurge in police violence does not exist in a vacuum—it cannot be understood without the crushing psychological impacts of the global pandemic. Up to 50% of the people killed by law enforcement are in the middle of a mental health crisis. Law enforcement agencies are not equipped to handle these calls, they don’t have adequate training and many of them don’t want the job. These officer-involved shootings result in unnecessary deaths, trauma, and pain. And those that are killed are disproportionately Black.

Saturday’s caravan participants noted that even in videos of Steven Taylor’s death, shoppers can be heard pleading with police not to shoot him and trying to protect Steven by talking him down—these did not sound like people who felt that Steven was a threat. After Steven was shot, someone can even be heard screaming “Don’t shoot him!”

San Leandro police claim they are undergoing an impartial review of the shooting and that District Attorney Nancy O’Malley will be completing an independent investigation, stating:

“The City of San Leandro remains committed to conducting a thorough investigation into the shooting death of Steven Taylor by the San Leandro Police Department. As part of that process, it is our intention to provide updates to the community and those impacted by this officer-involved shooting in a timely manner.”

However, the San Leandro Police Department has still not released the police report to the family of Guadalupe Manzo Ochoa, killed in 2014 by SLPD. Six years to view a police report is not in fact “timely” to family and community members concerned with police misconduct in the death of a loved one. Families of Guadalupe and Steven deserve better.

Anti Police-Terror Project will be continuing a campaign for Justice for Steven Taylor. Please follow us on Facebook for updates. 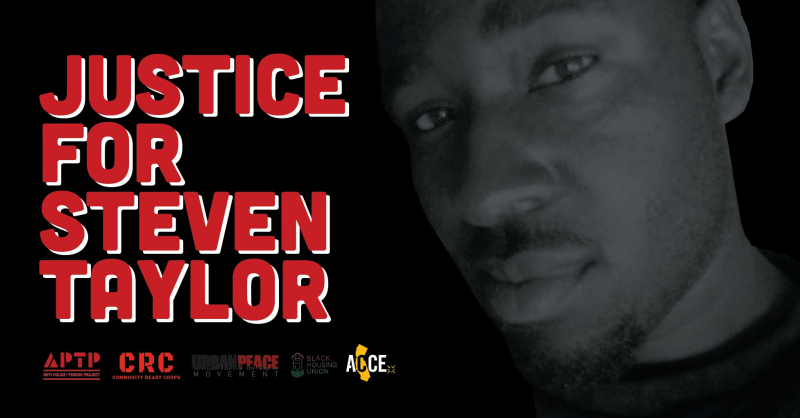