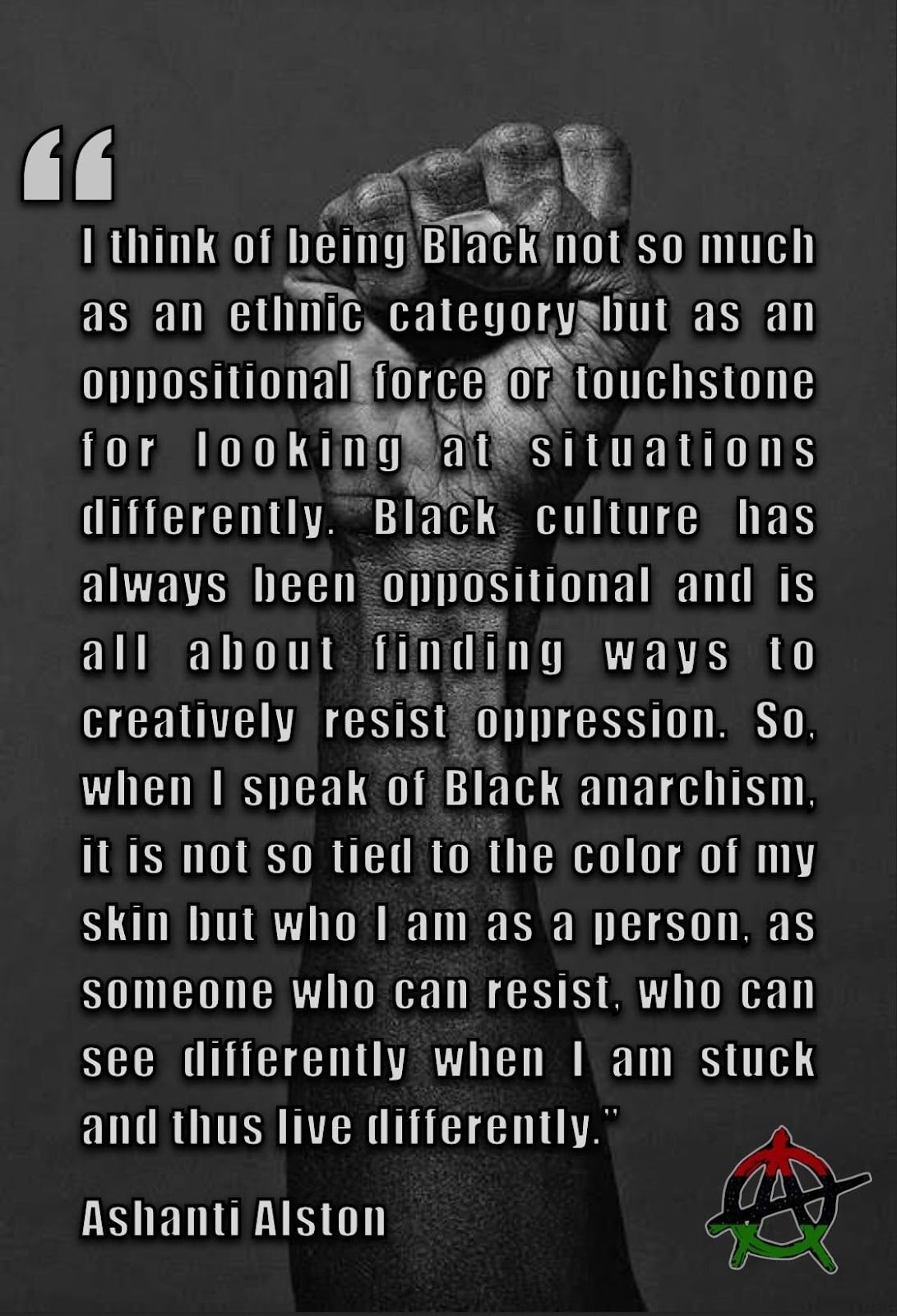 Image description — Black and white photo with a fist raised in the Black Power salute. Some words in white lettering are laid over it, from Ashanti Alston, which read: “I think of being Black not so much as an ethnic category but as an oppositional force or touchstone for looking at situations differently. Black culture has always been oppositional and is all about finding ways to creatively resist oppression. So, when I speak of a Black anarchism, it is not so tied to the color of my skin but who I am as a person, as someone who can resist, who can see differently when I am stuck, and thus live differently.” At the bottom of the image, we see a letter ‘A’ symbol in the Pan African colors (Red, Black, and Green). This is the Black Anarchic Radical emblem.

As conversations about #BlackLivesMatter continue, we must observe that not everyone is arriving at them at the same place. Some people are coming at it from an ‘anti-racist’ lens while others are coming at it from an ‘anti-colonial’ lens. This divergence in our community explains some of the fissures and disagreements about the nature/function of policing and the orientation of other institutions such as theatre, nonprofits, Black businesses, and more.

Anti-racism will have you opposing ‘white supremacy’ while anticolonialism opposes Western imperialism which births and grounds white supremacy. Anti-racism will challenge gender-based stereotypes against Black people and the implications of these racist narratives on Black kinship structures and Black love; while anti-colonialism calls into question the legitimacy of the Western scientific model of gender and how that reinforces both a binary and hierarchical understanding of not just kinship and love but also of humanness itself. Anti-racism will call attention to the unfair health and career impacts of the idea that Black people ‘have to work twice as hard to get half as far’ while anti-colonialism calls into question the existence of a social ladder and hierarchy of access that forces us to scramble at bottom of the barrel for mete crumbs, all while leaving countless mostly disabled Black folk treated as disposable, worthless ‘drain on resources’ for being unable to work at the pace and in the behavioral standards white society imposes. Even more, while Anti-racism will cry out against the broader exclusion of most of our people from participation in the economy in the ways white people have had with no problem, anti-colonialism understands that the modern economy itself always excludes us because it is fundamentally fed on the global and continued exploitation of our people’s labor and lands for the material gain of capitalists and colonizer nations.

Anti-racism will teach you not to demonize Afrikan social formations and cultures, to ‘respect them’ but won’t ‘go too far’ in terms of advocating and fighting for African societies to more fully inhabit the earth in place of these hegemonically imposed European ones; meanwhile, anti-colonialism demands both respect for our communities and it fights toward actual decolonization and the right for Afrikan autonomy over our communities’ food, health, education, defense, and other infrastructure needs.

Anti-racism will have you acknowledge that the US and its institutions are founded on slavery and genocide but will never broach the possibility that this violent basis is not a thing of the past but is an ongoing mechanism of oppression – which means we must immediately and unabashedly destroy Amerikkka and prioritize decolonial self-determination for Indigenous people in its stead. So, while anti-racism will critique racialist thinking, anti-colonial radicalism pushes us to work toward the abolition of the system which produces and is enhanced by racism — its material basis, which is a Euro-capitalist cis-hetero patriarchal society.

Because of this distinction, anti-racism is more likely to see policing as a problem of just race — that there aren’t enough Black cops, or perhaps the cops just need racial bias testing, or maybe we need body cameras to catch individually racist cops in the act and hopefully get them fired; whereas anti-colonialism understands policing as a residue of slavery, and teaches that policing/prisons/courts serve to enforce and protect the property interests of the ruling class.

Anti-racism is oftentimes a liberal analysis: it seeks to preserve the modern world order and just modify or progress it. Anti-colonialism, however, is a radical politic: which means, as Angela Davis says of radicalism, it is grasping things at the root. Anti-racism is more reformist while anti-colonialism is an avowedly revolutionary project.

My purpose in highlighting these differences is not to demand anti-colonialism of everyone here. Instead, it is to clarify that the ‘extremists’ everyone hears about, disproportionately a cohort of marginalized working class (and dark, not thin, and trans/queer) Black folk, are gonna rightly call out when new policies and propositions for how to make sure Black Lives Matter get framed as game-changing when they are not. If you are insistent on a liberal, reformist, anti-racist politics that is not about total structural change then when you discuss current shifts discuss them in that lane. But as for the horizons of what is truly world-shattering, that is for the radicals/anti-colonialists. Do not co-opt the narrative. We must fight racism, but if we truly care about destroying racism in its structural/institutional sense, we cannot isolate/decontextualize the problem of racism from a larger struggle against colonialism.

So this is an ask for honesty. If revolution is not for you, if you prefer idealistically removing one social problem from the totality (its larger context), rather than fighting for liberation in an expansive sense – then leave the radical aesthetics and radical terminology alone. But, if you gon lift the lingo and visualities, if you gon raise fists in the air and quote Assata or Malcolm or Marsha, then be true to the Black Radical Tradition they come from, and show respect to those of us who are dedicated to such a Legacy of Liberation. Stop invoking the spirit and power of our ancestors in the name of reclaiming the tools that uphold Massa’s house. And if you don’t want us trying to hold discourse to a revolutionary frequency, if you think we are haters or bitter, then stop setting your foot in conversations about social change that your intentionally ‘not extreme’ politics lacks the range to ever broach. Cuz at the end of the day, racism is literally a matter of life of death and those of us who want to end it in an encompassing way don’t have time to beat around the bush and coddle the feelings of people who are actually not serious about change (this applies to conversations about sexism and transphobia and ableism too).

In all, go head, fight for your ‘right’ to also have a suited up, pious/hyper-religious, police friendly, business owning, rentier class-oriented, authoritarian, patriarchal nuclear family situated consumerist, bag-securing lifestyle — a EuroAmerican social arrangement but in blackface — without lying about its radical/revolutionary power. It makes everyone’s job easier when we know who is about what. Draw your line in the sand, but stop tryna fool us into accepting you are on the side of the most marginal of Black folk. ‘Anti-racism’ is not enough if it ain’t anti-colonial. If you understand this, then dedicate yourself to enriching the heritage of resistance against anti-Black racism that our radical freedom fighters have passed down. Below are some lessons from these revolutionary traditions, which some of us take so that our struggle against colonialism can truly hit the problem on multiple fronts as is needed:

“Black feminism has provided the critical lens for Anarkatas to understand how our oppressions as Black people intersect to leave some at the margins and very bottom of hierarchy, teaching us to center the overlooked and extremely vulnerable; Queer/trans liberation has taught Anarkatas to re-envision the way we inhabit and understand our bodies as Black people, beyond sexual and anatomical reductions forced onto us by colonialism and capitalism, pushing us to understand how/why our bodies should or could perform freer relations to one another and the planet; the Black Panther Party inspires Anarkatas to organize around the survival, political education, and self-defense of our communities at a grassroots level, and to integrate a range of radical contributions into our quests for self-determination. Pan-Africanism connects Anarkata struggles for freedom to all members of the African community including the diaspora, understanding Black liberation outside the confines of national borders, and tying our bodily freedom to the liberation of our entire homeland itself from the snares of neocolonial/military-imperial rule. Afropessimism, antihumanism, and related frameworks help Anarkatas to understand the implications of our symbolic exclusion from the construct of humanity, and the way this affects who we organize with/for — ultimately challenging us to look beyond “humanity” as grounds for that which makes us as a people and our struggle liberation valid. Disability justice calls Anarkatas to recognize all our corporeal and cognitive makeup as valid and whole, and to understand our lived needs as arising not because we are failures but because oppressive socio-ecological contexts have closed us out of access and therefore must be eradicated if we are to live our full unique selves and do so autonomously. Prison abolition teaches Anarkatas that we must destroy all forms of enclosure and tear down the very material and imagined need of them in the first place — and that we alone are the ultimate guarantors of our safety. Finally, formations like the Street Trans Action Revolutionaries (STAR) or the Black Liberation Army remind Anarkatas that freedom can only be taken through grassroots organizing, mutual aid, and revolutionary struggle.”