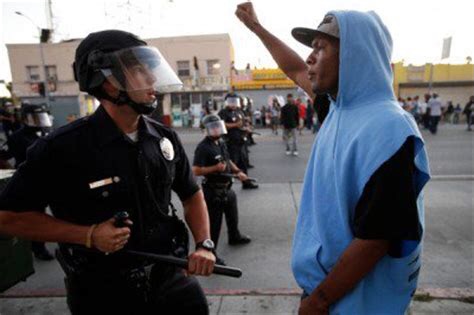 In light of the recent Black rebellions that have shaken the nation into the summer months, two key positions on policing abolition have reemerged. Defund the police, which had enjoyed some surprisingly mainstream attention, is essentially the position that minimizing police department budgets is the first step towards the dismantling of police systems. And then there is community control of the police, a less mainstream, but still widely popular position among Black activists, that makes the case that police departments have to be controlled by the community before they can be dismantled. While proponents of community control don’t understand their position as inherently against the projects of defunding or abolition, they tend to pit their position against calls for defunding, often linking them to corporate opportunism, non-profit schemes, and Black Lives Matter.

But what I want to do here before getting to my argument is to resituate this disagreement as originating squarely between two camps of the Black far left. Where many have said that Black Lives Matter is why defunding calls gained prominence in mainstream media, it is important to remember that BLM shied away from a defunding position in 2014. Defunding the police has always been an anarchist position, one in which Black anarchists, in particular, have been calling for before BLM. In the same sense, community control of the police springs from a Black state socialist position, one in which community control is but an extension and variation of proletarian control of state machineries and thereby the means of production. In this way, the classic disagreement that distinguishes these two positions play out in the ways we articulate the problem of policing and what emphasis is placed on as the solution. Community control wants to address the problem by emphasizing control of policing machineries. Defunding the police wants to address the problem by placing emphasis on divestment and disinvestment.I argue that the emphasis of community control proponents stems from a complete misunderstanding of the problem, in an article published in Hood Communist called Community Control Vs. Defunding the Police: A Critical Analysis, Max Rameau and Netfa Freeman mount a critique of defunding the police by first making a statement I can get behind. They contend that the “police are the consequence of wealth, not the cause of it.” The early precursors of the police grew out of the slave patrols that hunted runaway slaves and returned them to their masters, their necessity, of course, a consequence of the colonial slaveocracy, which generated wealth. Slaves were property, had a monetary value attached to them, and represented a commodity. Essentially Black people were wealth in that they were folded into the wealth of their

masters and were the very corporal extensions of it. Neither crime, nor violence, nor theft were enough to initiate the formation of modern policing. The entire institution we know as policing was built and eventually professionalized not merely based on wealth protection in the abstract, but necessitated on the securance of the slave as the master’s property. And so, it seems even more accurate to say that police are the consequence of BLACKNESS.

However, Rameau and Freeman seem to miss the point that the function of property protection by law enforcement since its inception has always been a classed and racialized antagonism. It is not merely property police are tasked to protect, but white property. Policing was derived from antiblackness and can never not be antiblack, regardless of who is doing the policing and who controls them. There is no way to do policing that is not antiblack since antiblack logics shapes notions of innocence and criminality, and since containment and capture are the principle answers to Blackness since the times of slave catchers. Class is both figured from and through antiblack logics.

Community control proponents make a strange assumption that the police can be made accountable to Black people, can serve Black people, and somehow cede control to Black people. Yet police fail the Black community everyday. They neglect the protection and safety of Black people, look the other way as Black women turn up missing, refuse to investigate homicides, allow gang activity to flourish unchecked, peddle drugs and guns into Black neigborhoods and, of course, murder us indescriminately while facing no consquences. The vast mountain of evidence points to police being unable and unfit to serve Black people, in any capacity, no matter who controls them. Wherever possible their goal has been to intentionally underserve for the purposes of Black containment and underdevelopment.

But the fact of the matter is Black people are not ever the police service subjects, white people are. All across the nation, “community” control of the police already exists in the form of suburban neighborhood watch groups, privatized security, and white supremacist organizations. White people are the de facto priority for police departments, making them always in control of the police. They can even deputize themselves and take the matter of police work into their own hands. What does it mean then to have community control of the police in the context of a white power structure that always subsumes that control, and in the face of a white settler populous ready to deputize itself at any given moment in time?

The white settler exercises control over police, and wherever they go police infrastructure follows. In the context of gentrification, notions about the very “community” we are speaking of

One of the main arguments crucial to the community control position is that for the abolition of the police, Black people must take control of policing infrastructure. The idea is that once the community has strong decision-making power, it can begin dismantling policing machinery. It does this through a “directly-elected civilian council” with final decision-making power at every level of department processes. In this way, the civilian council is meant to guide the piecemeal dismantling of police systems. But this operates from the assumption that priorities don’t change once power is attained. The council members of such a body would essentially be elected officials and bring all of the problems that come with electoral machinations. Greed, corruption, and abuses of power could take root in a framework that has no clear way the council would remain committed to abolition once control is gained. A council of democratically elected members could quickly become another council of headmen and overseers with power over a deadly occupying force.

This is a generous hypothetical since it is not at all convincing that the proposed civilian council would have any more influence over police departments than a regular police community review board. Although proponents insist that the council body would have final authority over police policy, disciplinary measures, hiring and firing power, and access to investigations and police contracts, where that power is coming from remains unclear and unspecified. One can only suspect it is backed by state, city, county, or federal institutions since Black communities lack the basic infrastructure to exercise control of the occupying force that polices them. Of those institutions, many were, and are, still resistant to the most modest defunding proposals even after major unrest. It is not clear what leverage proponents have that would guarantee all or even some of the proposed council powers. We have seen time and time again that police community review boards can be ignored, worked around, and generally rendered useless through individual officers, police chiefs, and police unions.

Community control of the police ends up being a bid for seizing power over police machinery while only vaguely promising it will be used for abolition. But understanding that police are a consequence of Blackness, we know that all policing is inherently anti-black and incapable of being repurposed for our uses without perpetuating the same violence. Why then do supporters of community control of the police insist on Black people “policing ourselves”? Black people policing themselves not only defeat the purpose of abolition but are antithetical to it. Policing ourselves would be the police state’s greatest accomplishment. We shouldn’t want to “police” ourselves; rather we should want to produce alternatives to safety that make our communities safer for all of us.

Defunding the police is a multifaceted tool meant to take a step in that direction by sabotaging existing police structures, increasing our ability to act without the weight of those forces, and providing space for those alternatives without the interference or need for police departments. It is by no means perfect but stages its critiques on the premise that no policing is good policing, and that police department should be as minimized as possible until they are non-existent. Critiques of defunding have said that it cannot accomplish this so long as it hasn’t power over police departments to do so, and that police will just reshuffle money, move some things around, and call it defunding. This criticism is warranted and reprepresents the limitations of defunding. But community control, which depends on petitioning state and federal actors for decision-making power over police departments, also runs up against the same problem of systemic sidestepping.

Rameau and Freeman argue in their article that defunding the police would only lead to more privatization of policing. For them, ruling class elites will turn towards privatized forces to fill in the gaps in police presence left from successful defunding campaigns. Yet privatization of police is a phenomenon that already exists and was happening even before defunding gained traction. Community control of the police doesn’t in any way, stop or prevent continued privatization of the policing sector. In fact, the specter of Black people having the real power to take over police departments and infrastructure would be alarming enough to ruling class elites to even accelerate the process of privatization. Why would ruling class elites rely on a policing apparatus controlled by the oppressed? One of the main arguments of the community control position is that we need to control the police to abolish them, implying that police would still be downsized eventually leads to the same gaps in police presence, prompting the same drive towards privatization that Remeau and Freeman warn.

I fear that community control positions really end up reinvesting in the police by operating from the assumption that power over the machinery of the police state brings us closer to abolition than divesting from that machinery entirely so as to make it obsolete. The former represents a different understanding of the police as a problem of power undergirded by a preoccupation with state power that drives state socialist motivations. Whereas the latter move from the anarchist understanding of the police as a problem of safety, and see their presence as always antiback and unsafe for Black people, regardless of who controls them. Their immediate removal and disinvestment opens the space for autonomous alternatives that allow us to breathe.