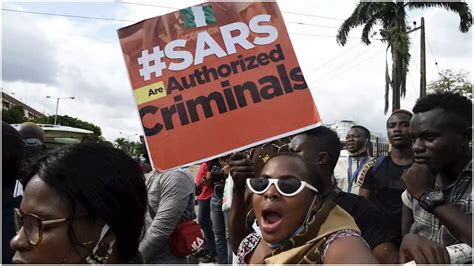 For the past week, Nigerian youth have been hitting the street to demand #EndSARS. The Special Anti-Robbery Squad Policing Unit (SARS) was created in 1992 to “stop crime”, specifically armed robbery and kidnapping which was a growing concern in the 1990s and 2000s. Armed robbery and kidnapping mainly targeted rich and middle-class Nigerians who have seen massive increases in wealth in the last few decades. However, like many policing squads, SARS is a largely unchecked unit that has been targeted young people based on their appearance of tattoos, earrings, iPhones, and cars utilizing that as evidence of fraud, scamming and crime. Additionally, this unit routinely profiles and targets sex workers, especially trans and queer Nigerians; oftentimes raping, beating arresting, and murdering them. But as we know, crime is a byproduct of poverty and while the Nigerian rich get richer, the poor have been getting poorer leading to social, economic, and political unrest; especially among youth.

On October 3rd, 2020, a video spread of SARS killing a young man in front of Wetland Hotel, Ughelli in Delta State, Nigeria, and then fleeing the scene with the person’s car. Since October 8, 2020, Nigerian youth have staged a protest outside of the Lagos State Governor’s house leading to massive protests across the country and around the world. There have been protests in Lagos, Abuja, Oyo State, Delta, Anambra, Osun, Rivers, Enugu, Ebonyi, Washington D.C., London, Canada, Germany, New York, Dublin, and more. These protests cut across ethnic groups, class, gender, and sexuality with the LGBTQ community and Nigerian women at the forefront. 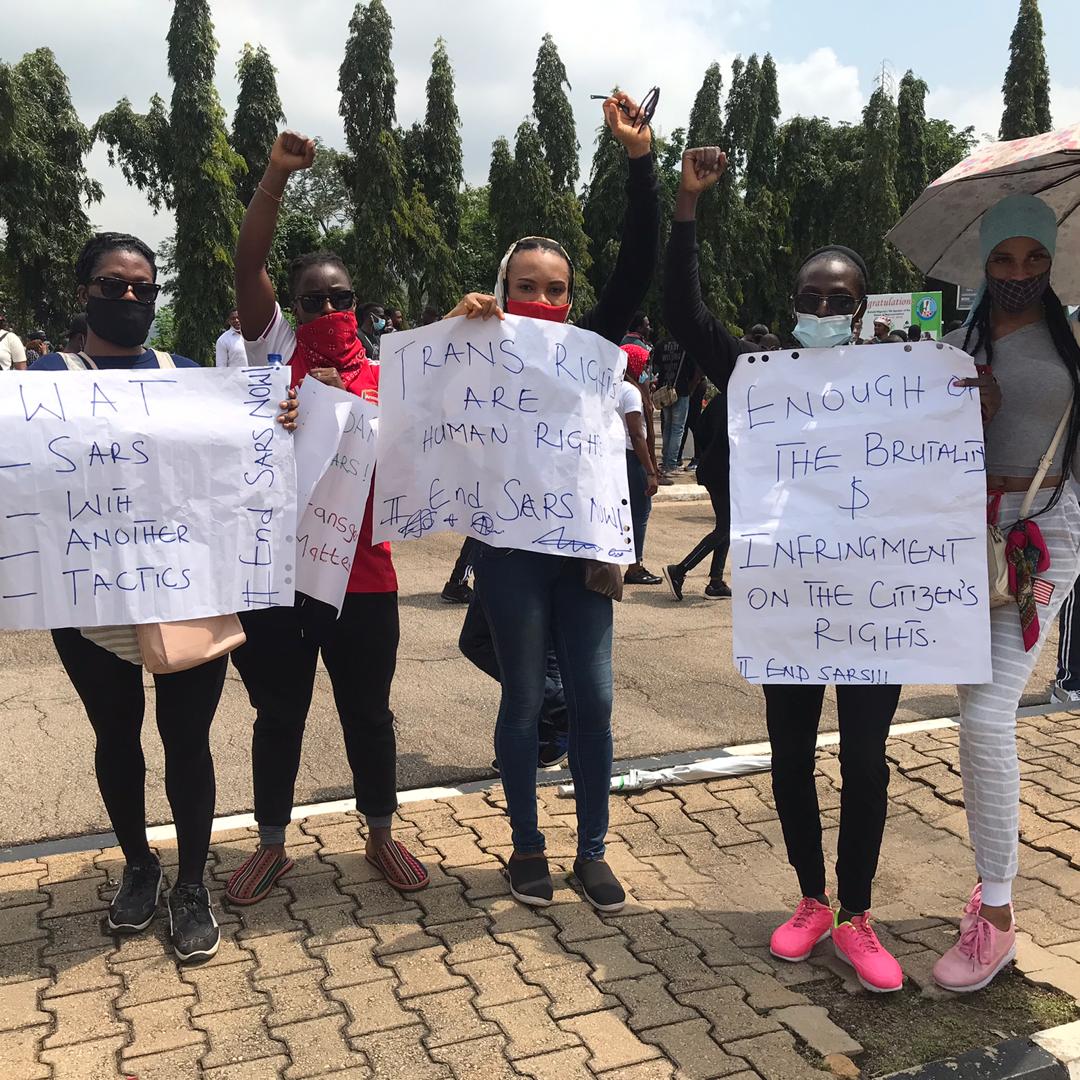 Those looking on from the West may see this anti-police struggle and deeply feel connected to what’s happening in Nigeria. However, this is not merely a struggle against a police-state, but rather a much larger imperialist neo-colonial policy that both nations share.

How Did Nigeria Get Here?

While slavery may have “ended” in the mid-1800s, colonialism did not. The period between 1881-1914 is known as the “Scramble for Africa.” In 1884, European elites came together for the Berlin Conference, where prominent colonial European nations decided that Africans had no claim to their land, created a racial hierarchy, and made a plan to expand the exploit African land, labor, and resources.

Europeans burned villages and sacred buildings, terrorized, jailed, and killed elders, deployed police and army to take over land, and imposed European law, religion, and authority. Police and military forces were established in key economic areas, specifically along the coast for access to trade and in the Niger Delta and surrounding areas that had access to oil, land, minerals.

According to Colonialism and Violence in Nigeria by Toyin Falola, in 1862, the British established the first military unit in Lagos, Nigeria. In 1879, The Royal Niger Company police were established. Then The Niger Coast police in 1888. In 1896, the Lagos Police. Falola explains that these forces were equipped with military weapons and trained to steal more land, fight Nigerian chiefs/kings, and protect the colonial governments.

Because of the geography and decentralized structure of southeastern Nigeria, particularly among the Igbo people, direct military rule proved difficult. In 1900, European warlord Lugard established “indirect rule” where individual Igbos were placed into leadership, such as “warrant chief”  to expand British domination (Colonialism and Violence, Toyin Falola). These warrant chiefs used the newly established “native courts” to impose colonial law. Nigerians who did not accept colonial rule were arrested and punished. Additional regulations were created to repress any type of resistance.

For example, the Collective Punishment Ordinance of 1909 empowered colonial officers to punish a group, a village, or a whole town for the “transgressions” of a member (Colonialism and Violence, Toyin Falola, 26). There were countless wars and various forms of resistance, especially among women in Southeastern Nigeria. Violent colonial master H.M Douglas’s utilized violence to impose “respect” for the Europeans and his laws. According to Falola, the more the people protested, the more violent Douglas’s responses became.

Falola further illustrates how Douglas used violence to force the Igbo people to build roads and houses for colonial masters.

“ Ekechi has given an example of the punishment Douglas meted out to another group, the Eziama, in March 1904 for their refusal to make roads or obey instructions Douglas had issued. The people were attacked, all their houses were destroyed, and the chiefs were ordered to force their subjects to construct roads. While the chiefs conveyed the message, many people conveyed the message, many people refused to cooperate. For two months, a constable was stationed among them, but they still refused to yield.” –Colonialism and Violence, Toyin Falola

The Nigerian police/ military have always served European interests. The roads that Nigerians were coerced to build made it easier for the police and army to move between economic posts and to respond and repress any acts of resistance among the natives. As evidenced above and stated in Colonialism and Violence, colonial masters punished those who refused to serve them, individuals who would express their grievances were warned, and chiefs were told to surrender rebellious men to the government. 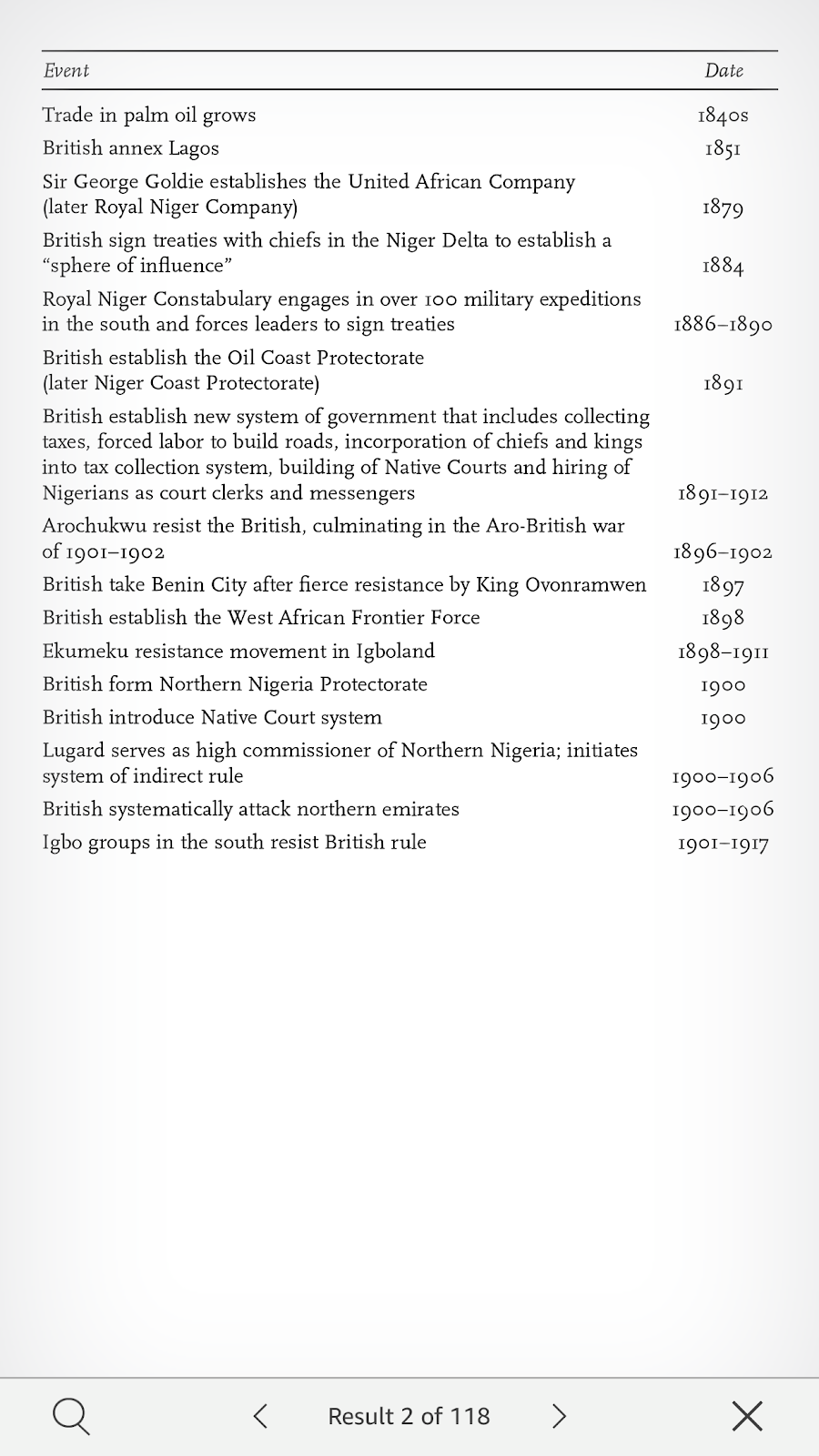 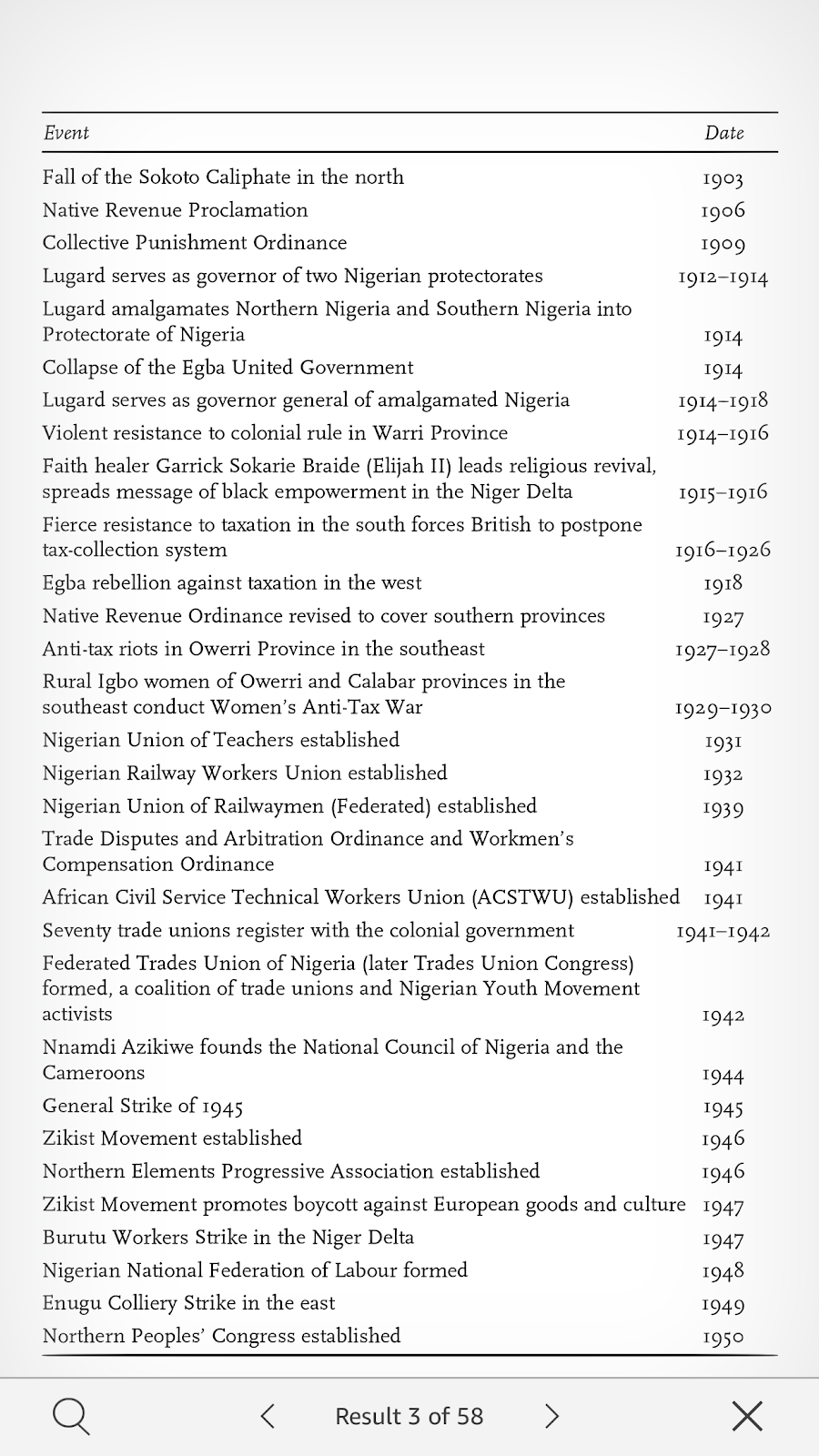 Tables from Colonialism and Violence by Toyin Falola showing a timeline of Nigerian history of colonialism and resistance documented in the book.

While the Europeans proved more violent with superior weaponary willing, there is a rich history of resistance against slavery, colonialism, imperialism, and neocolonialism.

Since 1492, the U.S. and its’ European allies have worked together to exploit African land, resources, and labor to fill their pockets. Africa has so many raw materials. The neo-colonial leaders profit, while the African masses suffer worldwide.

Before the 1990s, the U.S. focused on the Middle East and North Africa but then began to expand to West Africa and enter into agreements to engage in military exercises, training programs, and increased weapons. These are the tactics you see in the streets of Nigeria now.

Today, imperialism in Nigeria continues. Nigeria is the largest oil and gas producer in Africa and at the mercy of U.S. and European powers needs oil to make more weapons, to go to war to steal more land and resources, and extract more wealth. U.S. companies like Shell and Chevron are responsible for millions of deaths, environmental disasters, and constant intercommunal violence. Thousands of people in the Niger-Delta are being pushed off their lands to expand U.S. wealth.

Now, the U.S. and its’ European allies are using the “war of terror” to expand military domination on the African continent. Policies like The United States African Command (AFRICOM) are equipping and training Nigerian police/ military to “fight terrorism”; however people understand that what the U.S is doing is seeking to expand economic control over Nigeria. Even if SARS is to end, the western influence on the Nigerian government will only push to establish a newer arm of the law because of the intended purpose of the Nigerian police/ military.

Equally alarming is the Western investment in constructing new prisons in Ghana and Nigeria. We understand, here in the U.S, that prisons produce free labor. We know, here in the U.S., that prison serves as an extension of slavery. What we must begin to understand how Western colonial influence in West Africa will have the same effect. Abolition of neo-colonial oppressive police states MUST be international.

Beyond culture, the African diaspora is connected through neo-colonial policies that perpetuate anti- Blackness and strips us of the ability to learn about our inter-connecting histories. Resistance is as much of our shared past as the beat of a drum is. Many slave revolts in the U.S. were led by people trafficked from present-day Nigeria. Our destinies are tied. Africa must be free for Black people in the U.S. and everywhere to be free.

Donate to Trans and Queer Protesters on the ground. 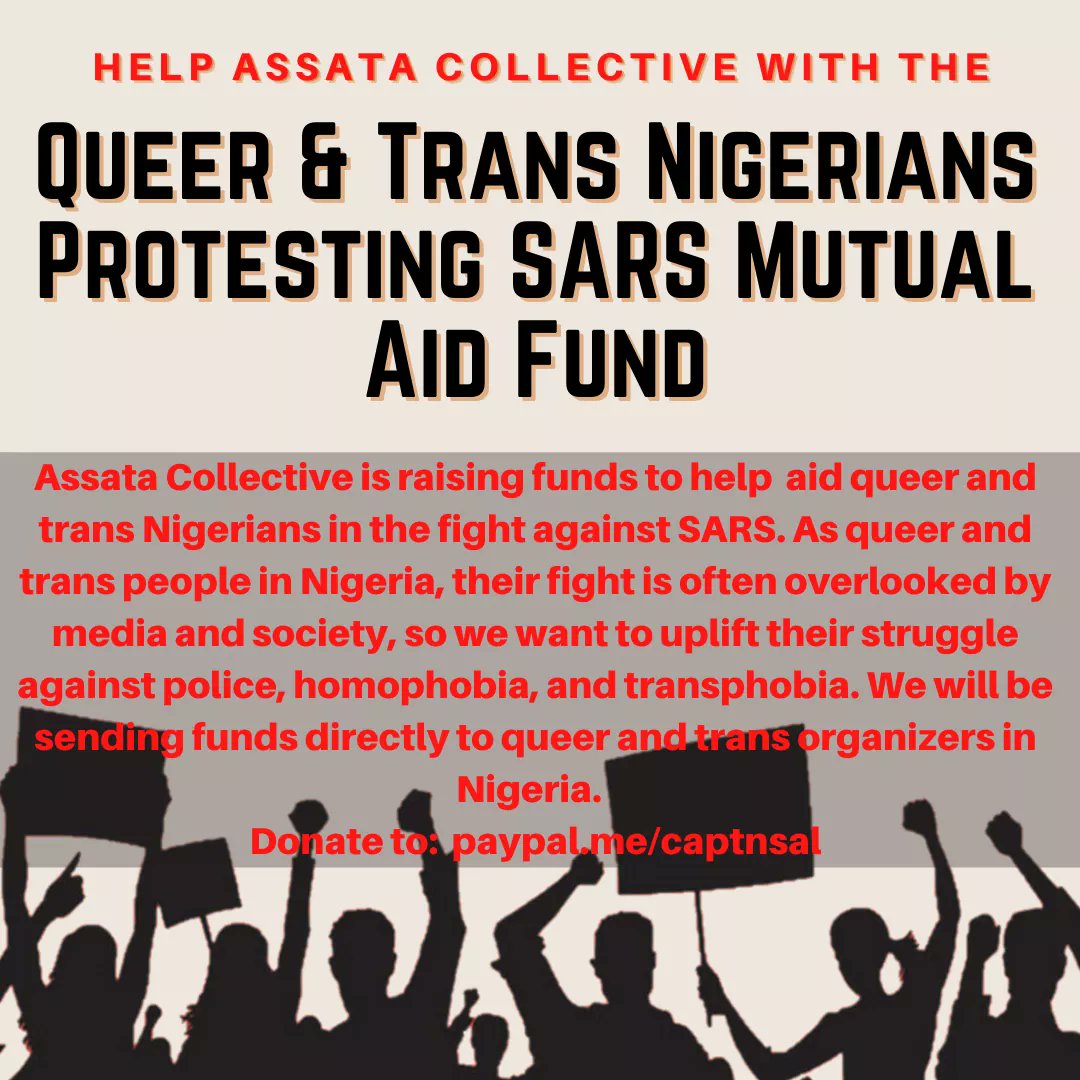 Join IG Live 10/16 at 6 pm EST to hear reflections on the protest in Nigeria. Save November 1st for a teach-in on the history of policing in Nigeria and abolition. Follow @theafrolegalise to get updated information.