Roots of Policing in Uganda

British colonizers formed the paramilitary Uganda Police Force under the name “Uganda Armed Constabulary” in 1899. Officers placed in leadership positions had experience policing for British interests in Palestine, Jamaica, Gambia, Nigeria, and Kenya, qualifying them to suppress mass rebellions against the colonial government.

In the early 1900’s, there were rebellions in several parts of Uganda, including Muhumza’s resistance wars to drive out Europeans, the 1907 Nyangire rebellion protesting the colonial imposition of Baganda chiefs in Bunyoro, the 1903 opposition to the growth of cotton cash crops in Ankole, and the Lamogi rebellion of 1911 against colonial taxes and exploitation. Through each of these rebellions, the police and military forces were there to control Africans and protect property. Whether or not they themselves were Africans, the very function of police remained the same: to protect and serve colonial interests.

In addition, or more accurately, an extension to the police working to stifle African rebellion, the British trained large bodies of troops called the King’s African Rifle (K.A.R). Though led by “ex”-British military fighters, most K.A.R soldiers, Walter Rodney outlines, were Africans. In fact, by 1918 there were 35,000 counted fighters and 9 out of 10 of them were Africans. On the German side, there were 3,000 German soldiers and 11,000 Africans by 1918. Leading Rodney to argue, during World War 1, “Africans were fighting Africans to see which European power should rule them”(How Europe Underdeveloped Africa, 187). In Uganda, this meant continued British colonial rule or German colonial rule. Both contradictory to the livelihoods of Africans.

In capitalist countries a multitude of moral teachers, counselors and “bewildered” separate the exploited from those in power. In the colonial countries, on the contrary, the policeman and the soldier, by their immediate presence and their frequent and direct action maintain contact with the native and advise him by means of rifle butts and napalm not to budge. It is obvious here that the agents of government speak the language of pure force.

In this way, we can start to redefine the meaning of violence. The state in itself, it’s existence is violence. That violence manifests in continuous wars, in hunger, in patriarchal violence, in the literal killing of people. Understanding systemic dominance and the ways it materially manifests as violence allows us to rethink the position of protestors, “looters” and all those responding to state repression. Redefining violence allows us to see the myriad ways it manifests. Not only through the police and military, but through the very existence of the systems- including the law.

In her recently released book entitled Decolonisation and Afro-Feminism, Sylvia Tamale argues that modern law in the African context is a product of colonialism.

Uganda’s first constitution of 1962, which is not much different than it’s current constitution states the role and purpose of police as for “the prevention and detection of crime, the apprehension of offenders, the preservation of law and order, the protection of property and the due enforcement of all laws and regulations; and as a military force to discharge military duties.”

Given many of the colonial structures remained in place and Uganda’s political system is an adaptation of British parliament, “Law and order” in Uganda is the law and order of the British colony.

Uganda’s national elections happened on January 14th, 2021.  Bids for the seat of president, which has been forcibly held by Yoweri Museveni since 1986 have always led to increased displays of state violence and repression.

On November 18th of last year, the #StopPoliceBrutalityUganda hashtag started popping up on twitter when Museveni’s sent his police to arrest one of his main contenders, Bobi Wine.

The reason they gave for this arrest was that Bobi Wine was holding an event with too many people gathered- making it a safety concern over the spread of COVID-19. There are several disconnects here. First, if the cry is to prevent COVID-19 deaths, why are the police killing people? 50 people were killed through the course of these 3 days and hundreds of people were arrested. That’s almost 25% of reported COVID deaths in Uganda as of December 6th 2020. Second, despite attracting similarly large crowds in Kotido and Gulu, security forces allowed rallies and processions for the ruling National Resistance Movement (NRM) party to continue uninterrupted.

This is because the Uganda police is the military arm of the National Resistance Movement (Museveni’s party). As such the job of the Uganda police and military is to protect the state and it’s interest. Museveni and the colonial apparatus’s objective is to maintain power so he uses the military to stifle protestors, candidates, etc. Anyone that is a threat to the colonial construct called Uganda, is a threat to the police. In this way, the state makes the purpose of the police clear. The police are not there to protect us.

The police and military alike are there to protect state interests. In this case, Museveni’s state is interested in maintaining power and arresting anyone he sees as a threat. 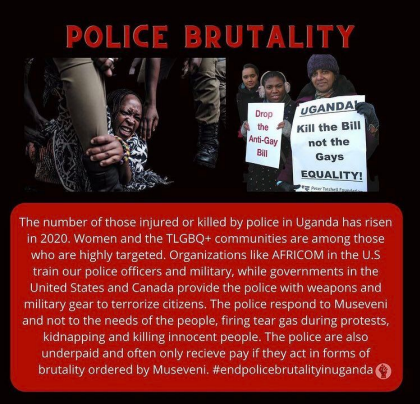 As outlined through the history of the colonial construct of Uganda, the Uganda police are accountable to the state. Not those they murder.

These agreements with the U.S are not new. They were there when Joseph Kony was killing in Uganda and the U.S as also helping Museveni get richer with the Acholi genocide.

Uganda was founded as a home for neo-colonial rule

In a 2016 report, Nick Turse outlines the ways Hillary Clinton, under the Obama administration, aided militaries in South Sudan. In 2008, the U.S passed legislation, called the Child Soldier Prevention Act which banned them from providing “military assistance” to countries who utilize child soldiers. In order to bypass this legislation and continue funding South Sudan’s repressive president, Salva Kiir, the White house issued annual waivers since South Sudan’s 2011 independence. Turse reports this added up to almost $620 million in U.S assistance in 2012.

This is not new. U.S.-Ugandan military partnership also dates back to the administration of Hillary Clinton’s husband, Bill Clinton, who used Uganda as a conduit for military aid to rebels in southern Sudan battling the government in Khartoum. Understanding Uganda’s history as a home base for imperialist control is a necessary step towards cultivating lasting change. Sylvia Tamale reminds us that “the ideal of Pan-Africanism cannot be achieved within the institutionalized coloniality of state politics.” If we accept this truth, what new solutions outside of the state can we come up with?